The Lac Herbin properties cover a total aggregate surface area of 9,706.87 hectares. The Aurbel-Lac Herbin group of properties comprises 431 claims, 4 mining leases and one surface lease, all located about 10 km northeast of the town of Val-d’Or, a historic and well known mining district in northwestern Quebec, Canada. The properties include two past mining operations, the Dumont and Ferderber mines where approximately 610,000 ounces of gold were produced; a milling complex, the Aurbel Mill; and the Lac Herbin gold mine.

The Val-d’Or mining district has been a prolific mining district since the opening of the Lamaque Mine in 1933. The region offers specialized services, a skilled labour force, mining equipment, supplies and contractors and adequate infrastructure for the mining industry. Electric energy is relatively inexpensive and is provided by Hydro-Quebec. There is ample local supply of water, both potable and for processing.

The area has a typical continental boreal climate, comparable to communities at the same latitude in mid Canada. Snow stays on the ground around mid-November and the ice leaves the lakes about early-mid May. Winters can be very cold with temperature averaging –15°C in January and February. The ground is frost free from May to October. Summers are warm and relatively dry with a mean temperature of 22°C.

The topography is relatively flat locally, half covered by marsh and vegetated by native scrubs, jack pine, spruce, poplar and birch trees are present in the region. The properties are traversed by the Bourlamaque River and its tributaries and include a number of small shallow lakes, namely the Herbin, Fortmac and Colombiere Lakes. Rock outcrops are rare.

Gold was first discovered on the properties in 1920. The original discovery, which was in the vicinity of the present Dumont Mine, was explored by Green-Stabell Mines. Some 2,000 feet of drilling was completed near the location of the Dumont shaft. The results were encouraging and mining operations started in 1934 by Payore Consolidated (“Payore”). The company sunk a three-compartment shaft to a depth of 375 feet and some 6,200 feet of lateral development. A modest 1,800 tons grading 0.18 ounces per tonnes were extracted in the period 1934-39. The Bras-d’Or property (Dumont Mine) was then optioned by Sylvanite Gold Mines, which completed approximately 2,000 feet of drilling and lateral development during the period 1939-41.

In 1944, Formaque Gold Mines Ltd (successor to Payore) drilled the property and completed additional underground development. This drilling resulted in the discovery of the main Dumont shear zone. The property remained dormant for the next 25 years due to a lack of funding, a low prevailing gold price ($35 US/oz) and the general belief that gold mineralization in the Val-d’Or district was related to structures south or along the contact with the Bourlamaque Batholith.

In 1969 Mr. Dumont and New Formaque Mines re-initiated drilling, confirming ore grade mineralization into the Main Shear. In 1973, New Formaque undertook to develop the property under a joint venture agreement with Wrightbar Mines Ltd. A total of 35,252 feet of drilling succeeded in outlining the mineralized zone over a strike length of 2,000 feet to a depth of 1,050 feet. Bras d’Or Mines was formed to conduct a feasibility study that was completed in 1975.

Development and production financing was finally arranged by Belmoral Mines and underground development was undertaken in 1978-79 including a new four-compartment shaft and additional exploration drilling. Commercial production started in May 1980 and continued until December 1994.

In 1974, Peter Ferderber staked about 11,875 acres of claims over the intrusive. The ground was acquired by Belmoral Mines and it initiated a ground magnetometer survey in January 1975. A VLF-EM survey, carried out in the spring of 1975 outlined a strong conductivity zone coincident with a magnetic anomaly delineated northeast of the Dumont Mine. Diamond drilling followed in April and in June 1975. The Ferderber deposit was finally delineated over an east-west strike length of 3,000 feet and to a depth of 1,000 feet. Preproduction development was undertaken in October 1978 and access to the ore zone established with a decline ramp excavated to a depth of 570 feet connected lateral development on the 100, 200, 350 and 500 levels.

In May 1980, the back of a stope on level 200 caved to the bedrock-overburden interface, allowing considerable amounts of mud, gravel and water into the mine. This accident caused eight deaths and operations were suspended for about six months.

The Ferderber mine operated continuously from February 1979 until the end of 1994, while the Dumont mine operated from April 1980 until the end of 1994. About 3,280,000 tons of ore have been extracted and more than 610,000 oz of gold produced from both operations. The mines and the properties changed hands a number of times during the past two decades. The properties were owned outright and operated by AUR Resources Inc. since November 1993 until their closure in 1994. The Belmoral Mill, renamed Aurbel Mill, operated as a custom milling facility until 1996 when it was placed under care and maintenance.

In September 2003, Alexis Minerals Corporation acquired from, and assumed the rights of, Forbes & Manhattan Inc. in an option agreement between Forbes & Manhattan Inc. and Aur Resources Inc., whereby Alexis Minerals Corporation could earn a 50% interest in the Aurbel-Lac Herbin group of properties. Alexis had a right to purchase the remaining 50% Aur Resources Inc. interest and the Belmoral Mill. The earn in and the subsequent purchase of the remaining 50% ownership and the Aurbel Mill were all exercised during 2006. In 2009, Alexis mined 32,999 ounces of gold from the Lac Herbin Mine and had approximately 7,400 ounces in stockpile at year end. 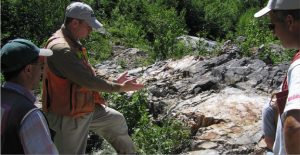 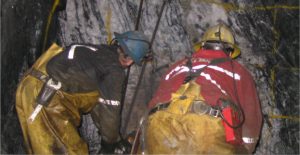 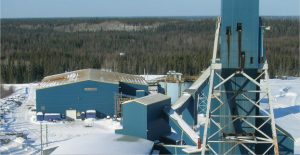